"Into the black box: Labour and the unknown in logistical life. A Research Workshop

The COVID-19 pandemic is the time most of us realized that global logistical chains are what make our lives flow as they usually do. We would simply not be what we are – more or less healthy, productive, or even just kept alive in dangerous emergencies – without toilet paper, sugar, ffp2 masks and antibiotics being steadily produced and delivered to shops and services all around us, or right to our homes. The fact that we became aware of how essential these capitalist infrastructures are only in a time of global impasse speaks to one of the main characteristics of global supply chains: how little we know about them. In fact, as Miriam Posner (2021) writes, even where large amounts of data are supposedly collected, “global supply chains work as efficiently as they do only because of strategic gaps in our knowledge about them”.

Logistics means the managing of the complex operations of moving goods and people around the globe. Logistical systems have become the drivers of globalization and are embedded in processes of accumulation, forming the invisible basis for capitalist expansion. Deborah Cowen (2014) argues that logistical chains have emerged as new form of territoriality, which cuts across the nation-states space. It is these ‘vital systems’ (Collier and Lakoff 2014) which become the object of protection, rather than the local lives and environments sustaining such spaces. Yet often companies claim (truthfully, as Posner (2021) would argue) that they know next to little about the actual conditions along their supply chains. In this regard, as Posner (2021) writes, the image of the “chain” is deeply misleading: supply “chains” are rather entangled processes where production is sustained through frictions (Tsing, 2005; see also Lisle, 2021).

In this workshop, we want to look “into the black box” of ignorance in and about logistical life. We move from the belief that lack of knowledge and shifting regimes of visibility do things – they produce spaces, position bodies, efface violence, erase histories and responsibilities. Importantly, we also reflect on ignorance and invisibility as sites of possibility – Pandora boxes of tactics and germinal unpredictability. We are interested in particular in exploring three dark corners of the black box:

1. Labour and its pervasive presence in supply. While supply chains often convey the image of self-sustaining systems, automation remains largely a “fantasy” (Delfanti, 2021; Khalili, 2020). Supply chains are entirely dependent on logistics workers’ mostly invisible labour in shipping, ports, trucking, warehouses, distribution centers and delivery. We welcome presentations dealing with aspects of logistics labour, such as precarity, differentiation of work contracts, racialization, and the pressures for cost minimization and automatization

2. The often undetected expansion of logistical rationales into spaces that are apparently peripheral to capitalist production, such as humanitarianism and development aid, migration management, and global public health. Among other themes, we are interested in the conditions of logistical labour in these contexts, and their implications for the politics of social reproduction.

3. Breakpoints, breakdowns and failures in logistical life: how can we make sense of the relation between between knowledge/data/ignorance, (in)visibility and failure/breakdowns in logistical capitalism, and open it up for alternative practices of supplying and, more broadly, social reproduction?

This workshop invites presentations dealing with the art of moving goods or people around, both locally and globally, across a variety of geographical locations. We are particularly interested in perspectives from the colonized majority world, post-socialist societies, and post-welfarist workspaces in the Nordic countries.

Into the Box Ship: social worlds and material entanglements

Logistics, and perhaps shipping especially, is a “black box” in the sense of being a “complex system or device whose internal workings are hidden or not readily understood” (Oxford Dictionary definition of Black Box). Operating out at sea and inside the enclosed and securitized spaces of container terminals, ships and their cargo are mostly “out of sight out of mind” as Alan Sekula once put it in his documentary “The Forgotten Space”. And within this black box of logistics, we have a “Russian doll” kind of set up, of boxes within boxes within boxes.

The shipping container is one “box” that has become a symbol of supply chain capitalism. In this talk, I take not the shipping container, but the container ship itself as the site and object of analysis. The ship is of course also a container of sorts. The term “box ship” refers to a ship that carries boxes, but it is also itself a kind of box. And like the boxes it carries, the Box ship is both a symbol of mobility and global capitalism, at the same time as it is a container whose contents are largely hidden, concealing within itself complex social worlds and organizations whose everyday workings remain invisible to most people. More specifically, the ship contains workers, whose everyday lives, labor, contracts, social relations and experiences are both essential to our everyday life as well as hidden away from our eyes.

In this paper, I draw on my ethnographic research from onboard such box ships, to talk about what life is like for people who live and work inside them. I ask what it means to take these ships seriously as objects of social analysis, and explore what kind of material, social, and cultural object the contemporary container ship is to its workers. Container ships are material objects that are often anthropomorphized. They are “born,” christened, launched, maintained and cared for, and eventually sent to “die.” They have economic value, but also affective and symbolic worth for those encountering them. Ships are worksites, sources of livelihood, as well as homes to their crews, while they can also be experienced as prisons.

Beyond the Box: I argue that if we look into the box ship, we also “open the black box,” in the sense that we see how it stretches out, beyond its steel walls to entangle people, places, value systems, through its physical journeys across space and time. By taking the ship as an object of social analysis, I complicate this seemingly industrial, hard cover object to unveil a much more fluid, complex, entangled and ambiguous social entity.

Workers and Robots in the Warehouse

Millions of warehouse workers are part of an experiment in changing the way we all work. They work in ways that are reminiscent of the tumult of early industrial capitalism, while being subject to pervasive digital control, new forms of automation, and aggressive managerial techniques. From robotic arms trained by humans, to augmented reality goggles and AI-powered surveillance cameras, capital uses warehouse technology to organize and discipline human labour in order to fulfill the desires of one-click consumer culture. Yet as the warehouse is increasingly automated, discontent increases, and logistics becomes a laboratory for worker revolt too.

Information about the seminar organizers

The seminar Into the black box: Labour and the unknown in logistical life is organized by the [Link to the webpage] Centre of Excellence in Law, Identity and the European Narratives at the University of Helsinki, the Elisa Pascucci's project “The Politics of project management and project-based work in non-profit organizations” (funded by Kone Foundation) at Tampere University and Academy Research Fellow Lotta Haikkola's project “Logistics at work. Young men moving goods in warehouse and transportation services” (funded by Academy of Finland) at the Finnish Youth Research Network. 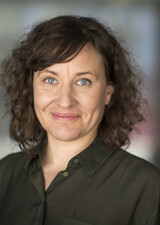